The Best VPN For Disney Plus 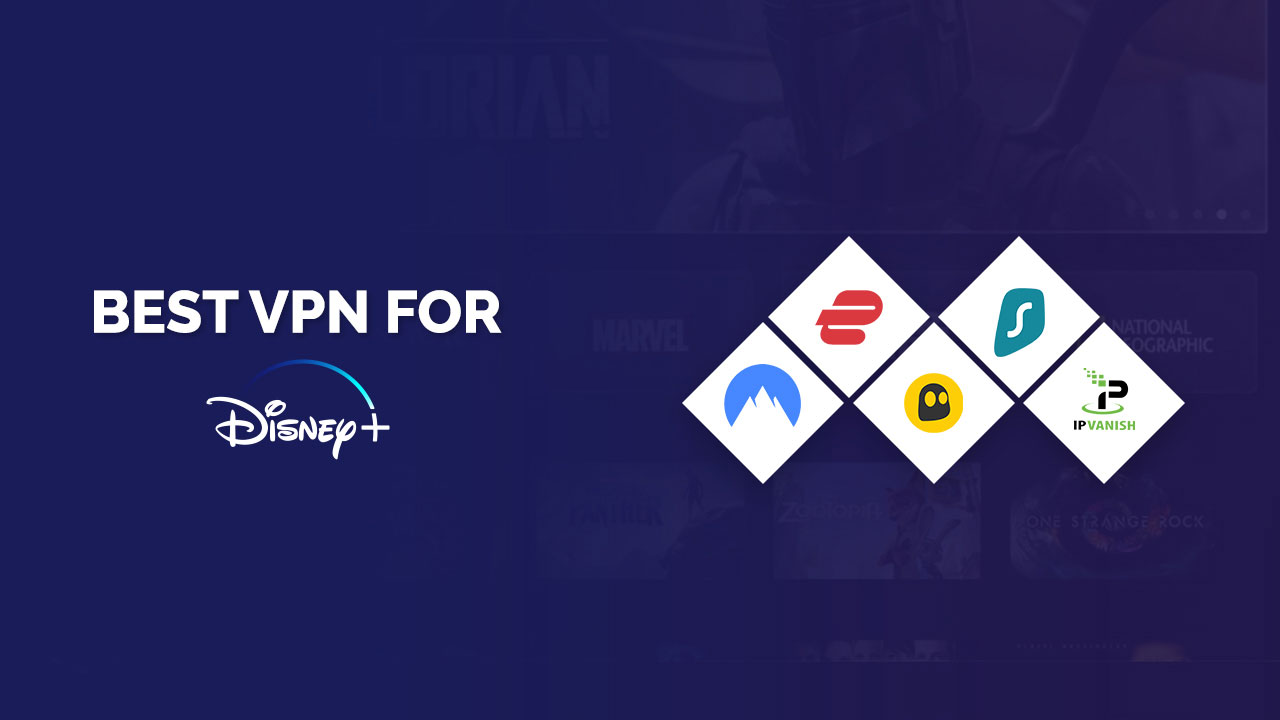 Disney Plus claims to be blocking VPN traffic. If you are the one who loves to watch Disney Plus content, then this news might hit you hard, and you might also look for a permanent solution. The best available solution is to use a VPN and unblock the streaming site.

Why Use a VPN for Disney Plus?

Disney Plus has been new in the streaming world, but it has gained tremendous popularity in a short time. At present, it has more than 10 million subscribers making it a successful streaming platform. Disney Plus is officially available in the following countries:

However, if you belong to any country other than the ones mentioned above, then sorry, you can’t access Disney Plus. You come across errors like Please try again or Sorry, Disney Plus is not available in your region. In other words, it means that Disney Plus is available in some countries, and the reason is that they have the content license.

The streaming site, to protect its content from being aired in any unapproved country, the platform uses IP tracking technology to recognize the user location who attempts to access their service. Here a Disney VPN comes into play. If you are using a VPN that is compatible with Disney Plus, you can bypass the geographical restrictions, but if not, you’ll get the same error again and again. Thus, it would help if you had a VPN for accessing Disney Plus.

It changes your virtual location and pretends like you’re using it from the region where it’s accessible. Also, it encrypts your data traffic, so tracking won’t get to know about your activities if anyone is tracking. But, make sure it is the one that works with Disney Plus.

How to Choose a VPN for Disney Plus?

Unblocking Disney Plus is tricky and more challenging than accessing another streaming platform. You can’t use a free VPN or any VPN for Disney Plus because the website’s anti-VPN technology can detect and block you again. To access Disney Plus, you should use a VPN that comprises the following features:

• Fast Speed: Ensure that the VPN you choose should provide quick, consistent, and reliable connection speed across all the servers.

• Reliable Network: Look for a VPN that has a vast server network. In other words, it means that the VPN should offer maximum server location all across the globe.

• Device Compatibility: Select a VPN that comes with dedicated apps for all major operating systems. This includes Android, iOS, macOS, Windows, and others.

• Multiple Logins: Select a VPN that offers a range of simultaneous connections from a single account.

• Security Features: Do check the security features your VPN offers. Make sure the VPN you choose should consist of a kill switch, DNS leak protection, a Smart DNS tool, a no-logging policy, and military-grade encryption.

Five Best VPN for Disney Plus

After reviewing several VPNs based on the features mentioned above, we’ve come up with the five best VPNs for Disney Plus. Let’s review them in brief.

NordVPN is our first choice for the best VPN for Disney Plus. It is the fastest VPN. It is an excellent option to use when it comes to Disney Plus. We tested NordVPN and were glad that it worked when we connected it with servers available in Australia, New Zealand, and the Netherlands. Even on the US server, you can stream Disney Plus without any buffering and connection lags. Its fast speed makes it the best Disney Plus VPN.

Moreover, NordVPN comprises an extensive server network. It has its server spread in all countries so, accessing Disney Plus from any location isn’t a problem if you use NordVPN. The VPN provider also comes with a Smart DNS tool that makes it easy to access the geo-blocked content. The VPN also comes with other handfuls of advanced security boosting features like a kill switch, DNS/IP leak protection, and a strict no-log policy.

The service provider is free from logging any of your activities so, don’t worry; nobody can ever know that you streamed Disney Plus. NordVPN allows up to six simultaneous connections. It is compatible with all major operating systems and has dedicated apps as well. The apps are easy to install and use, making them a perfect choice for Disney Plus.

The British-Virgin-based ExpressVPN is another best VPN for Disney Plus. ExpressVPN is famous for its reliable connection, no-log policy, and Smart DNS tool, all of which are necessary for streaming Disney Plus. The VPN has 3000+ servers globally and 12Disney+ locations. Only in the US, does ExpressVPN has 26 server locations, Australia has 6, Canada has 5, the Netherlands has 4, and New Zealand has one server. When tested, we could unblock Disney Plus from all servers with consistent and fast speed. There was no significant connection lag that interrupted our streaming experience.

Like NordVPN, ExpressVPN also comes with a Smart DNS tool and Media Streamer feature that allows you to stream foreign content without much hassle. The VPN follows a strict no-log policy and the industry’s highest encryption standard for maintaining the highest level of online security and privacy. Furthermore, the service provider comes with other security features such as a kill switch and VPN leak protection that safeguard your IP address and data traffic from leaking.

It comes with easy-to-use and installs apps for all platforms and devices. Within a few seconds, you can install the VPN software on your Windows, iOS, macOS, and Android devices. Also, it allows you to connect to five devices at a time.

SurfShark is an excellent option when it comes to streaming. It is compatible with all streaming platforms, including Disney Plus. With SurfShark, you can unblock Disney Plus without much issue. All credit goes to its reliable network speed, unlimited simultaneous connections, and server network. Though SurfShark’s server network is not as vast as Nord or CyberGhost, it doesn’t affect its performance while connecting to Disney Plus.

When tested, so, everything was on point. There wasn’t any connection lag or any connection issue because of a small server network. The service provider exhibits a strict zero-log policy under which none of your activities are being recorded. It is a safe and private VPN to use as no one can ever catch you using Disney Plus. The VPN has an effective kill switch, Smart DNS tool, and split tunneling mode that allows you to stream Disney Plus with complete anonymity.

The VPN has all those features that pose no threat and danger to your online privacy and security. SurfShark is among those successful VPN providers that allow you to connect as many devices as you want from a single device. It also works with many devices on which you’d like to watch Disney Plus, such as Android, iOS, macOS, Windows, Apple TV, PlayStation, and Xbox.

If you are looking for an affordable VPN that you can use to access Disney Plus, I’d recommend using a Private VPN. It is one of the cheapest VPN that you can use for streaming Disney Plus and Netflix, BBC iPlayer, Hulu, HBO, and Amazon Prime Video. Many reject PrivateVPN because of its small server network, but it isn’t a big problem. When we tested the VPN for accessing Disney Plus so, we were successful; however, the speeds were not more competitive as the top-tier VPN providers.

The speeds were fast on local servers but on long-distance; it was a bit slow. If you want to enjoy streaming Disney Plus more quickly, make sure you select the nearest server. From a security point of view, PrivateVPN is a reliable one to use. Like other VPNs mentioned above, it doesn’t store logs or your IP address, or any other data to expose you. It has a kill switch that safeguards your IP address when there’s a connection drop.

However, the VPN doesn’t have a smart DNS tool, but it doesn’t create many issues when you stream Disney Plus. Besides this, the service provider does have intrusive apps for all operating systems and devices. You can even use PrivateVPN on Apple TV and Fire TV and connect up to six devices at a time.

When looking for the best VPN for Disney Plus, one cannot neglect the Romanian-based CyberGhost, which consists of more than 5500 server networks. It offers unlimited bandwidth and reliable speeds that are enough for streaming Disney Plus or any other streaming platform.

The VPN also allows you to connect seven simultaneous connections, which is more than the average. When we tested the VPN for accessing Disney Plus, we didn’t face any issue, and here the credit goes to the extensive server network. Although speeds were slower on long-distance, the server’s availability didn’t make things out of our control.

The VPN provider uses military-grade encryption, secure VPN protocols, and advanced security boosting features. It also comes with an ad and malware blocker that ensures that your streaming experience gets disturbed by no means. Moreover, it also uses a kill switch for protecting our IP address and is free from all kinds of leaks. It doesn’t store any of the PII that can reveal you’re true identity. However, it does keep your email address and username for account and billing purposes.

But, to enjoy complete anonymity, you can opt to purchase it via bitcoin. CyberGhost VPN offers dedicated and easy-to-use apps for Android, iOS, macOS, and Windows. So, you can’t overlook this VPN for accessing Disney Plus.

How to Use a VPN to Unblock Disney Plus?

You don’t need to panic much when it comes to accessing Disney Plus. With the right VPN like the ones discussed above, you can unblock the regionally locked service within a few seconds. Below are the steps to use a VPN for unblocking Disney Plus.

FAQs About Disney Plus VPN

The free VPNs are not reliable because they log your activities and data and sell them to third parties. So, it’d be wise if you save some bucks every month and invest in an affordable and secure premium VPN for Disney Plus. Which is the best VPN for Disney Plus? Although all the VPNs mentioned above are best to unblock Disney Plus, I’d recommend SurfShark. It allows unlimited connections and is quite affordable. The speeds are fast enough for streaming on Disney Plus, and also it comes up with all features required for unblocking the streaming platform.

Is it legal to use a VPN on Disney Plus? The usage of VPNs is legal in most countries. There is nothing wrong or illegal if you watch Disney Plus with a VPN. So, don’t think about it and start using it if you haven’t used it yet. What can I watch on Disney Plus? You can watch a wide range of Disney Plus content as well other content on Disney Plus. Does Disney Plus block VPN?

Yes, the streaming platform uses anti-VPN technology that blocks the VPN traffic. But, it does not with every VPN you use. If you use a VPN that’s compatible with Disney Plus, you can easily access the site; otherwise, you’ll see an error message on your screen.

Disney Plus is only accessible in limited locations, so; you need a VPN to use the service. Not all VPNs can unblock the streaming platform. Use any of the above-mentioned best VPNs for Disney Plus and enjoy watching your favorite content on the site.

Best VPN For Disney Plus