The Best VPN For Torrenting In 2022 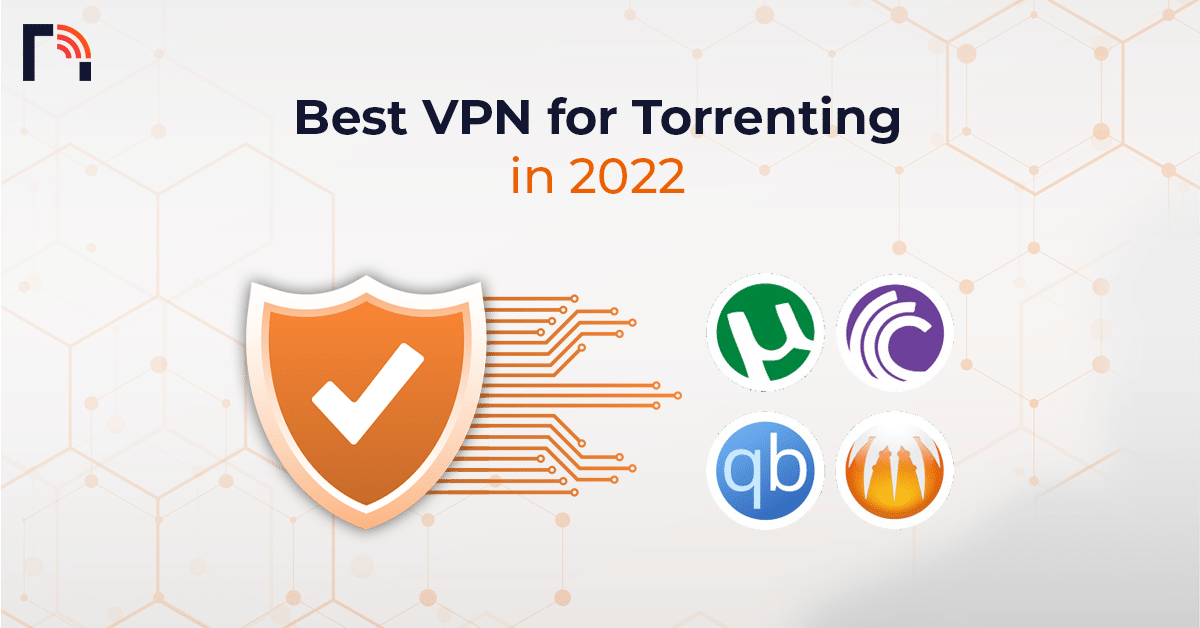 This article focuses on the best VPN for torrenting. If you’re looking for one, then stick with us. The guide doesn’t restrict the best VPNs and the reasons for using VPNs for torrenting, and the criteria we come with these VPNs. So, let’s dive into this article.

Torrenting comes with a lot of risks and dangers. Since it depends on your country, torrenting can bring serious consequences. What happens is that when you download a torrent using the torrent client, anyone can see your IP address and browsing activities. It can also reveal your virtual location and become vulnerable to hackers, and ISP can catch you. It is even possible that malicious agents can interfere with your downloading process and infect your device with malware and ransomware.

If your ISP knows about torrenting, either charge you, send letter statements and start throttling your connection. The best way to avoid this situation is to use the best VPN for torrenting. A VPN hides your IP address and encrypts the P2P traffic by redirecting it through an encrypted and secure tunnel. All this ensures that you remain anonymous throughout the torrenting experience. Hence, if you download torrents, it is better to start using a reliable best VPN for torrenting immediately.

Using a safe and reliable VPN for torrenting is not an easy task. Not all VPNs are designed for P2P activities. There are certain aspects that you need to focus on when you select the best VPN for torrenting. To do our work easy, we created a list of particular characteristics and tested several VPNs. These features are as follows:

After reviewing several VPNs for torrenting, we finally come up with the five best VPNs as described below:

The Panama-based NordVPN is an excellent VPN for torrenting with super-fast speeds and VPN leak protection. The presence of optimized P2P servers makes it one of the best choices for torrenting. NordVPN’s popularity is also because of its fast speeds.

The industry’s best VPN for torrenting provides the same rate across all servers with no or minimal connection lag. We tested NordVPN’s speed while downloading torrent files and were glad they were honest with their claims. Here it is important to note that not all P2P servers allow torrenting.

A total of 14 countries don’t enable NordVPN to allow P2P traffic. Other than that, you can enjoy torrenting in all other countries. While navigating the app settings, you can find these servers labelled as Speciality Servers. The VPN doesn’t leak IP or DNS, which gives you another reason to use NordVPN for torrenting. As it belongs to Panama, it is a safe and secure jurisdiction. Also, like ExpressVPN, NordVPN doesn’t store users’ logs. It doesn’t have any record of your activity logs telling you that you were involved in torrenting.

The service provider has various security boosting features, including an active kill switch and SOCKS5. We also tested the kill switch and found that it works fine in case of a connection drop. Moreover, the SOCKS5 proxy changes your IP address and is used when torrenting clients like BitTorrent.

ExpressVPN is an ideal option for torrenting. It has an extensive server network that offers specialized P2P servers that allow downloading torrent files without restrictions. ExpressVPN is a British Virgin Island-based VPN that falls outside the jurisdiction of the surveillance eyes. It means that the VPN is safe and secure to use. The users don’t have to worry about their logs getting leaked, revealing that they’re involved in torrenting.

It is also because the service provider follows a strict no-log policy forbidding keeping any activity log. The service provider offers a fast speed that is more than enough for torrenting and P2P file-sharing. ExpressVPN works exceptionally well with torrent clients like BitTorrent, Deluge, and uTorrent. We also tested the VPN for IP, DNS, and WebRTC leaks while downloading torrent files. We were happy with the results because the best VPN for torrenting didn’t leak any of your sensitive information. Besides this, the VPN has a pack of advanced security features, including a kill switch. ExpressVPN’s kill switch is known as a Network Lock.

This impressive feature protects your IP address from leaking when your connection drops. It makes sure that your torrenting experience isn’t affected. However, the only drawback is that ExpressVPN lacks a port forwarding feature but still when you upload torrent files, the speeds are not as much affected as you think.

The last best VPN for torrenting in our list is the US-based PIA VPN. Despite belonging to the US jurisdiction, PIA is a safe VPN that doesn’t store any activity log and ensures that no one can catch you while you torrent. This makes it the best VPN for torrenting. Besides this, PIA VPN has a port forwarding feature that most other VPNs lack. A port forwarding feature allows you to continue with P2P file-sharing even if your ISP blocks the incoming torrent traffic.

The PIA VPN comes with an effective kill switch and IP leak protection. Also, it increases the overall torrent speed and lets you upload seeds. All this ensures that your identity remains hidden throughout your torrent. The best VPN for torrenting also offers pretty decent rates that are enough for torrenting. It offers unlimited bandwidth and is compatible with all major torrent clients, including BitTorrent, uTorrent, and Deluge. There are no P2P servers, but it also allows P2P file-sharing on all random servers making it a great choice.

Another great VPN in the list for the best VPN for torrenting is none other than SurfShark. It is the best option when it comes to torrenting. The service provider allows torrenting on all servers. All the P2P optimized servers allow downloading torrents by using various clients like BitTorrent, Vuze, uTorrent, and Deluge. Some dedicated P2P servers are available in 14 countries, including the US, UK, Canada, Germany, and Singapore, making the torrenting experience worth amazing.

The VPN has all the advanced security boosting features like the other top-tier VPN providers. This includes a helpful kill switch, robust encryption standard, secure encryption protocol, and VPN leak protection. SurfShark is among those VPNs that protect your IP address and download activities from leaking when the best VPN for torrenting connection drops. Moreover, during P2P file-sharing, it doesn’t reveal your DNS or IP address, and it’s proven with a test. It also means that with SurfShark VPN, you can torrent anonymously without anyone noticing you. SurfShark offers a fast speed that is more than enough for torrenting when it comes to speed, making it compete with Nord and ExpressVPN.

The best thing about SurfShark is the Camouflage mode. This technology makes your VPN traffic look like normal browsing and makes it impossible for anyone to recognize that you’re using a VPN. It is another reason why you should use it for torrenting. The service provider also follows a zero-log policy, so you don’t have to worry about browsing history. However, the only drawback is that it lacks a port forwarding feature; otherwise, it is an excellent VPN for torrenting.

CyberGhost is yet another best VPN for torrenting. It allows you to torrent files by keeping your identity hidden. The Romanian-based VPN is fast, secure, and has optimized P2P servers, making it a popular torrenting VPN. The service provider has a strict no-log policy that doesn’t record your IP address, browsing history, personal data, or other sensitive information. The VPN comes with a kill switch and a built-in DNS and IP leak protection.

We also ran a few tests to test their claims and were happy with the results. The test results showed that CyberGhost doesn’t leak any of your data and ensures that your torrenting experience remains secure. The VPN provides fast speed on all local connections; however, the pace was slower on the long-distance server than on other VPNs mentioned in this list. Overall, CyberGhost offers competitive rates that are fast enough for P2P file-sharing without causing much fuss. One best features of CyberGhost is that it has P2P servers in all its apps.

The VPN app shows the number of connected users on each server. You can decide which is the less congested server for a smooth torrenting experience. To find a torrenting server, open the VPN app > click on For Torrenting tab > choose the optimized P2P server of your choice. There are two significant drawbacks of using CyberGhost VPN. Like other VPNs, it lacks a port forwarding feature, because of which you can’t seed torrent files. Furthermore, it doesn’t allow torrenting on Australian servers. As a whole, it is an affordable torrenting VPN which you should use at least once.

Below are the steps for setting up a best VPN for torrenting. All these steps are pretty simple, follow them and set up a VPN within a few seconds. We’ve used NordVPN here.

No, torrenting is legal in most parts of the world. The legitimacy of the torrenting process depends on the country in which you reside. In some parts of the world, downloading harmful copyrighted material or content is illegal, and you can face severe charges. But downloading torrent files, including games, movies, or songs, isn’t illegal. Using a best VPN for torrenting won’t make it legal but can make you and your activities anonymous.

Why is a VPN necessary for torrenting?

Is a free VPN suitable for torrenting?

A simple answer is a no. Most free VPNs lack advanced security features like a kill switch and protection against VPN leaks. Without this, when you download torrent, there are greater chances that your identity is revealed to your ISP.

Which is the best VPN for torrenting?

We recommend NordVPN as the best VPN for torrenting. It’s because of its fast and reliable connection speed, helpful kill switch, port forwarding feature, and strict no-log policy.

Can you be caught while torrenting?

If you torrent without a VPN or your best VPN for torrenting leaks your IP address, it is easy for your ISP to catch you. Some countries have strict torrenting laws, and they consider it illegal no matter what. If you have ever seen torrenting, you have to pay hefty penalties, and in severe cases, you can be imprisoned.

Torrenting is vital if you love watching extreme movies and songs and playing online games. However, torrenting without a VPN is like introducing yourself to a problem. It would help if you always used the best VPN for torrenting while you torrent. The above-mentioned VPNs for torrenting are the best in terms of performance and service. You should use any one of them and secure your torrenting experience.