Home > Guides > What is Deep Fake & it’s impact on security?

What is Deep Fake & it’s impact on security? 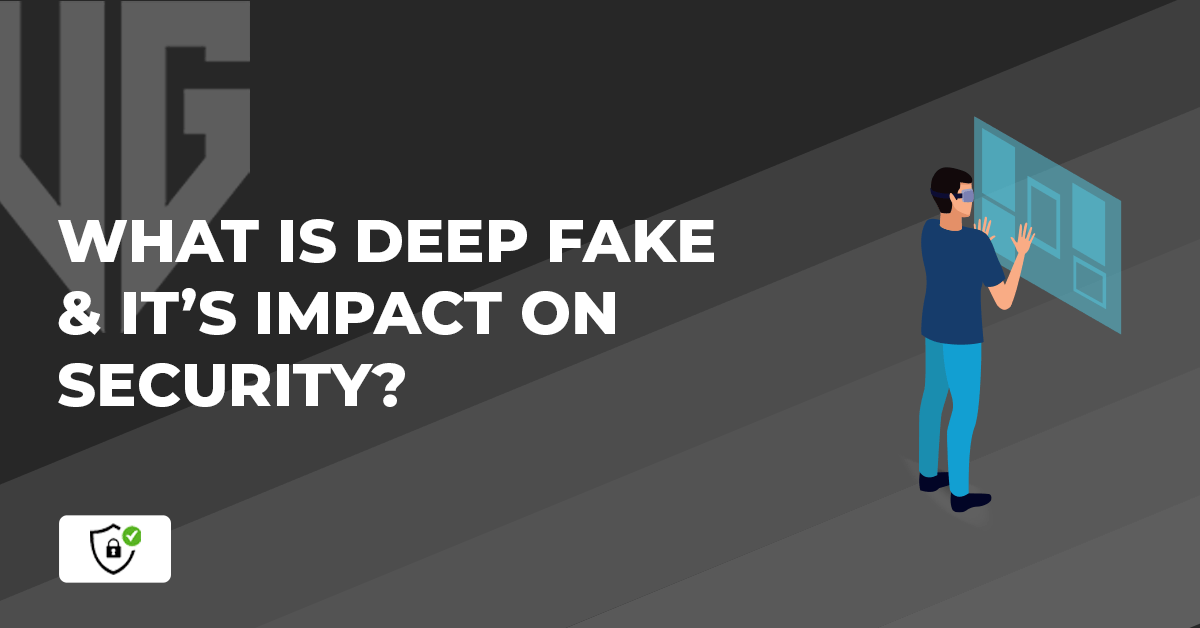 What is Deep Fake?

Deep fake is a type of synthetic media in which a person’s existing image or video is replaced with someone else’s likeness. Deep fakes are formed through artificial intelligence and machine learning to create fake events and manipulate people for personal benefit.

Deep fake is a part of AI. It is a specialised tool which uses deep learning to convert or generate audio/video content with a high potential to deceive. Moreover, the act of faking content isn’t new. Deepfake leverages powerful techniques to create fake events like celebrity pornographic videos, fake voices of politicians, and financial frauds.

The main machine learning methods used to create deep fakes are based on deep learning. They involve training generative neural network architectures, such as autoencoders or generative adversarial networks (GAN). How are Deepfakes Made?

At first, a user runs hundreds of face shots of the two people he wishes to swap through an AI algorithm called an encoder. The encoder finds and learns mutual features between two faces and lowers them to their shared standard features, thus, compressing the images.

A second AI algorithm, called the decoder, is then taught to recuperate the faces from the compressed images. As the faces differ, one decoder is trained to recover the first person’s face while another recovers the second person’s face. To perform the face swap, you feed encoded images into the “wrong” decoder.

1. What are deepfakes?
A deep fake is a neural network that is adaptive at various functions, including generating, interpreting high bandwidth media, and generating fake press. In deepfake, you can take voice of one person and apply a different style to it, sounding like someone else. It could be anything from a modified and edited audio, video or image file.
2. How to detect deepfakes?
Identifying a deepfake is sophisticated for a layman. Much research is going on to counter the technology and avoid its harmful effects. The best way is to examine the original content of that person and then try to look at jaw movement, eye blinking and facial motion.
3. How long have deep fake been around?
In 2012, deep faking suffered on the dark corner of the internet. Today, it is famous for gimmicky memes. However, it is a severe threat to the privacy and security of people.
4. Are big giants tackling deep fake?
All tech and social media giants, including Facebook, Twitter, and LinkedIn, focus on avoiding deepfakes. The research is being done to technologically address deepfakes like embedding digital watermarks and fingerprints and using signatures inside file metadata.

How to Detect them?

Hence, to detect deepfakes, there is also technology built through AI using algorithms. They detect signs that wouldn’t be on real photos/videos. Initially, it was easy to catch deepfakes due to poor synchronisation, patchy skin tones or weirdly rendered jewellery. However, due to the latest technological advancements, detecting deepfakes is very difficult. Governments, universities, and tech firms all fund research to detect deepfakes.

Deepfakes has raised eyebrows and opened up conversations about the seriousness or even dangers of its technology. It can target warfare, organisations, politicians or almost everyone to increase or kill morale.

In March 2022, Sensity, an intelligence company specialising in visual threats, recorded 85000 deepfake videos. These were meant to destroy reputations, consisting of non-consensual pornography, inciting fear and violence through fake speeches from targeted politicians.

Additionally, in 2019, the wall street journal reported. The CEO of a UK-based company instantly transferred 220,000 euros, believing the orders were from his boss. Deepfake severely impacts security and is considered one of the most dangerous uses of Artificial Intelligence. They can promote the read of misinformation and trigger new crime schemes and information wars as they tend to erase the divide between true and false content.

With the development of technology and related applications, DF creation becomes available to many people, including perpetrators, abusers, and criminals. The critical problem is that given the nature of GANs and other digital content forgery technologies, DFs are hardly detected. We have yet to fully recognise and realise all threats that the DF can pose in the future.