What Are Five Eyes Nine Eyes and Fourteen Eyes? 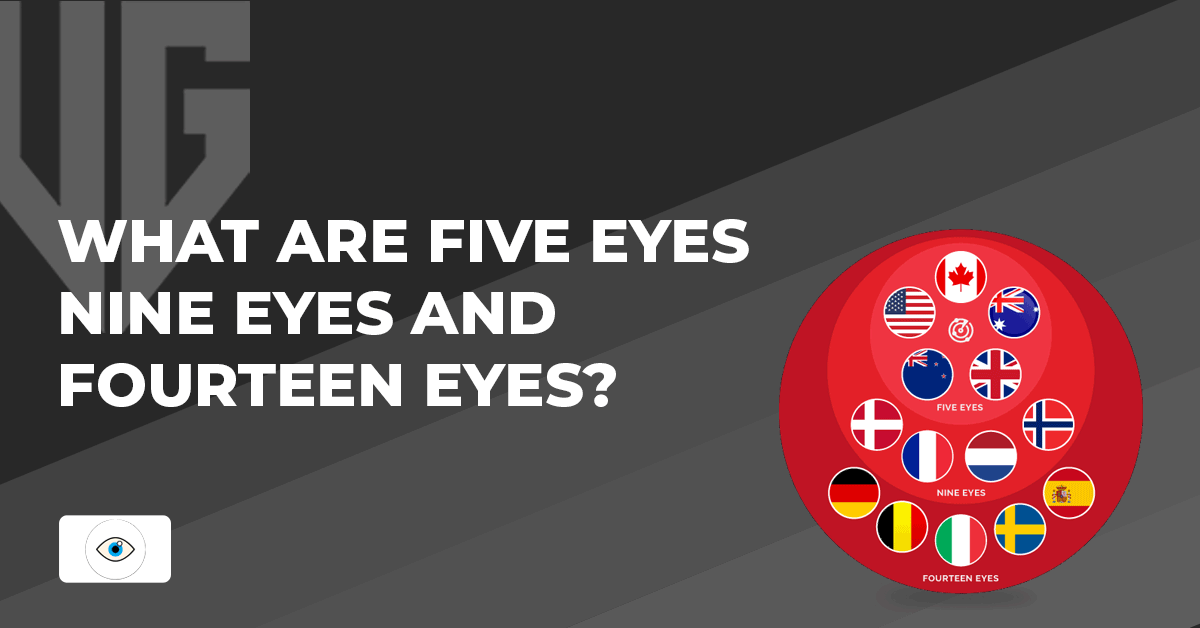 If you’re a privacy-conscious person, you are well aware of the surveillance group. Five eyes, nine eyes, and fourteen eyes are a name for different countries that track and share users’ data. Living in any of these countries is not correct from a privacy perspective. This alliance group has now become a coalition that has an ass to users’ information enough.

The agencies and the ISPs check your online activities and hand over your data to the government. Online privacy is the netizens’ fundamental right, but it is at significant risk with these surveillance coalitions. In this article, I’m sharing all the relevant information about what five eyes, nine eyes, and 14 eyes countries are. What do they do? What are the consequences? How to protect your online presence? So, let’s begin with it.

The five eyes, nine eyes, and fourteen eyes represent different countries that work under an international agreement to track and share users’ data. Below is an explanation of all the three global surveillance alliances you should know. But, let’s first have a brief overview of its historical background.

Historical Background of the Alliance Group

In WWII, the UK and the US 1941 signed an informal agreement known as UKUS Agreement. The prime purpose of this agreement was to share intelligence. After three years, in 1946, the deal turned into a formal one. It expanded its alliance and included four other nations to be a part of the alliance. In this way, the five core countries become fourteen countries. Some countries have joined the alliance group as third-party countries. They have made nothing official yet, so; we can’t regard them as a part of the alliance group.

It is also known as FVEY and was formed in the early 1940s. This group includes some of the most powerful and influential countries of that time:

Under the UKUSA Agreement, the UK and the USA are the major alliance countries. The other three joined as second parties, but their role was the same. All the member nations work together, analyze, and share intelligence. They do it both nationally and internationally. The countries urge each other to spy on each other’s citizens.

Each nation can watch and track other nations’ citizens and share their intelligence. In this way, these countries send and put in place data retention laws on each other. Monitoring each other’s citizens can pressure the other nation to hand over the users’ logs.

The most notorious countries in the FEYE are Australia, the UK, and the US. These countries have a long history of tracking their citizens’ activities. Here are some of the before-passed surveillance bills in these countries. Let’s have a look at them.

All the FEYE nations use a network of spy stations known as ECHELON for data collection and surveillance. These surveillance stations are advanced and can intercept the data sent via computer, fax, and telephones. They can track your bank account and invade data from satellite relays. After surveillance and gathering data in the databases, it is stored.

The US Government, for the past 30 years, has been denying the ECHELON system. The UK Government gives a similar reaction to it. But, regardless of the rejection by both countries, experts have confirmed this project’s various aspects.

The nine eyes alliance became famous after the Edward Snowden revelations in 2013. The nine alliance group’s fundamental goal was to work with the FEYE group to collect and share bulk surveillance. The alliance group is a third-party extension of the five eyes group. No formal and official agreement exists between the countries except for an arrangement among SIGINT entities.

Another name of the nine alliance groups is SIGINT Seniors of Europe (SSEUR). It’s designed to exchange military intelligence. But later, it expanded its vision and decided to include the surveillance alliance of every citizen. Some countries also plan to be a part of the 14 eyes alliance. These countries include Japan and Israel, but nothing is official yet.

Various agencies are part of SIGN IT. These include BND, DGSC, NSA, and GCHQ. These agencies take part in meetings and sessions to discuss global intelligence. Another entity like SIGINT was the SIGINT Seniors of the Pacific was formed in 2005. It includes all the five eyes countries along with France, India, Singapore, South Korea Thailand

How to Protect Against Surveillance Alliance?

With time, our lives rely on the internet. With that, online privacy and protection have become a fundamental need. Considering how the alliance group works, it’s good to have complete knowledge about the five eyes, nine eyes, and fourteen eyes group. It aims to invade individual privacy over the web. The government agencies in one group have a right to intercept your privacy and share your personal information with another country without your consent.

To prevent mass surveillance, the best available solution is to use a VPN. It’s an outstanding privacy tool that encrypts your data and masks your IP address from all spying eyes. With a VPN, no one can detect you or your online activities. Connecting to a VPN encrypts your data and passes it via the encrypted tunnel to the VPN server. The VPN designates you with a new IP address different from your original one. Whatever request you make to the internet is through this new IP address.

This way, your service provider won’t know about your online activities. You must note that you can’t just randomly select a VPN and use it. VPN jurisdiction is crucial when choosing a VPN to use in any one of the alliance countries. But, if a VPN belongs to any of the alliance groups, then don’t worry. Several reliable and trustworthy VPNs are available that follow a strict no-log policy. Under this policy, a VPN is prohibited from storing users’ logs. When they don’t have user data, it is impossible to provide data to government agencies.

All these techniques mentioned above are enough for deriving data from a population of millions. With these methods, it is pretty clear that the agencies in these countries spy on their users’ activities, and you should take a stand in this stance.

What Else Can You Do To Protect Your Online Presence?

Besides a VPN, other tools can help you to bypass surveillance. The following mentioned below are some easy ways to secure your online presence.

You can also maintain a personal web presence by following the ways mentioned above. But, among all, using a VPN is the most effective solution in this regard.

The five eyes, nine eyes, and fourteen eyes is a global alliance that shares mass intelligence and surveillance data. All the world’s most powerful countries are members of this alliance that have turned into a global spying network. All these countries decide not to follow national and privacy laws to get more hands-on information. Your online privacy is at significant risk if you live in any alliance country. They are going to share your information with other countries.

Using a reliable VPN is the most effective solution in such a situation. A VPN is a handy solution in this case. It encrypts your data and follows a no-log policy guarantee of not storing users’ logs that they can hand over to the government.